Ronstadt Revival is the premiere tribute to Linda Ronstadt, with a full 7 piece band, including fiddle and pedal steel, to bring you the true authentic sound of the Ronstadt catalog. Real, raw and 100% LIVE music. From Linda’s 1967 beginnings with The Stone Poneys, to her amazing renditions in the 70s of songs by beloved songwriters like Smokey Robinson, Warren Zevon, Lowell George, The Eagles and The Rolling Stones, to her 80s smash album Mad Love with its New Wave vibe. Ronstadt Revival will take you on a timeless journey of all of your favorites including, You're No Good, Blue Bayou, When Will I Be Loved, Tracks of My Tears and so much more!

"Ronstadt Revival sold out their first show here, we can’t wait to have them back!" ~ Coach House Concert Hall

“Shannon is an incredibly engaging performer with a fantastic voice and tremendous charisma, our audience loved her!" ~ Empress Theatre

“The fiddle and pedal steel are such a treat! They are the whole package!” ~ Mike H.

Ronstadt Revival recorded live in August of 2021. This song is a big fan favorite and we just love to hear our audience sing along with us. Blue Bayou was beautifully written by Roy Orbison and Joe Melson. It was originally sung and recorded by Orbison, who had an international hit with his version in 1963. It later became Linda Ronstadt's signature song, with which she scored a Top 5 hit with her cover in 1977.

We'd love to see you, check our EVENTS PAGE for a show near you!

We're coming to you on Friday, October 16th! Grab all of your friends and come sing along with us! Go to our EVENTS PAGE for details and tickets! 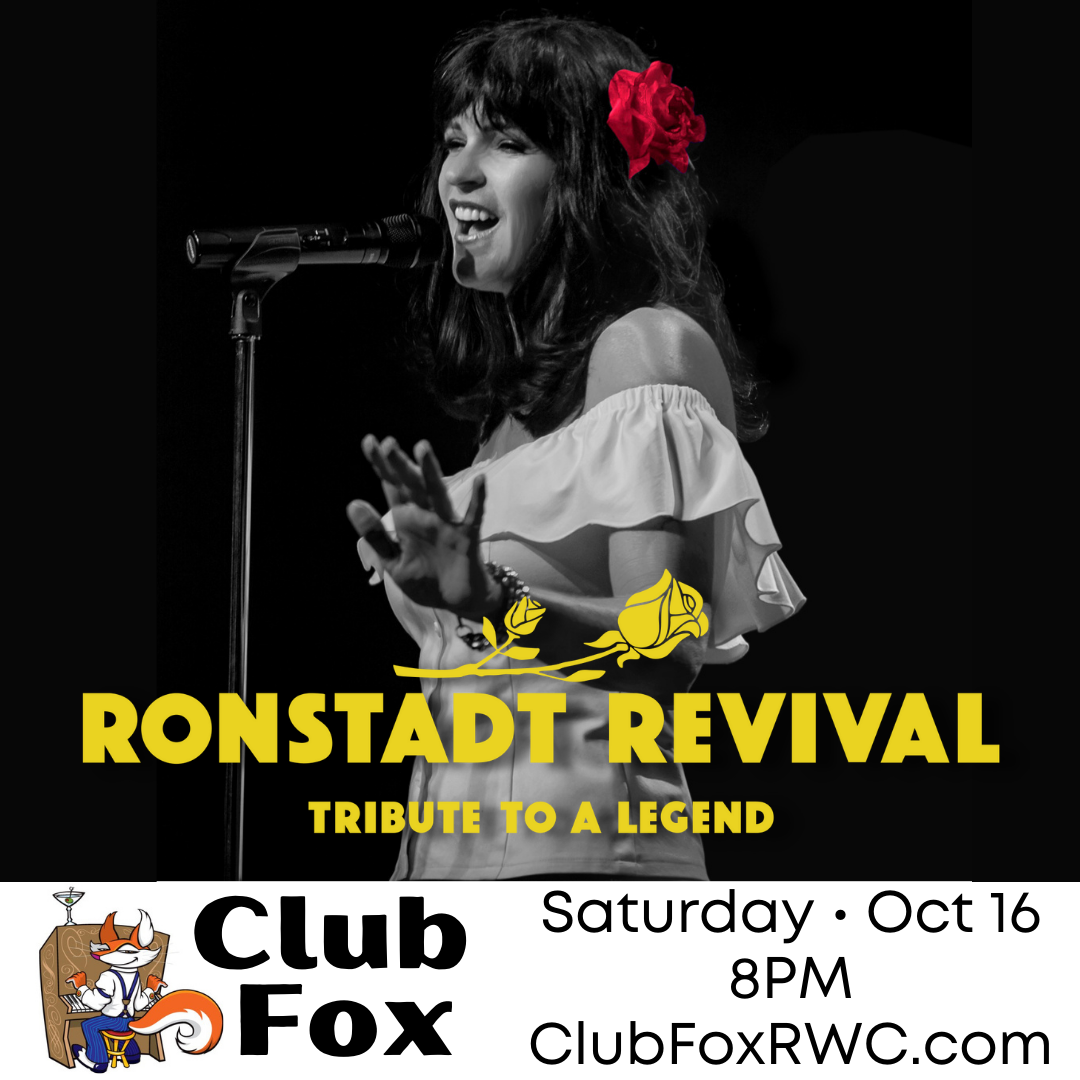 We are gettin’ ready for some great shows! Check our EVENTS PAGE for all of the details and grab your tickets today! 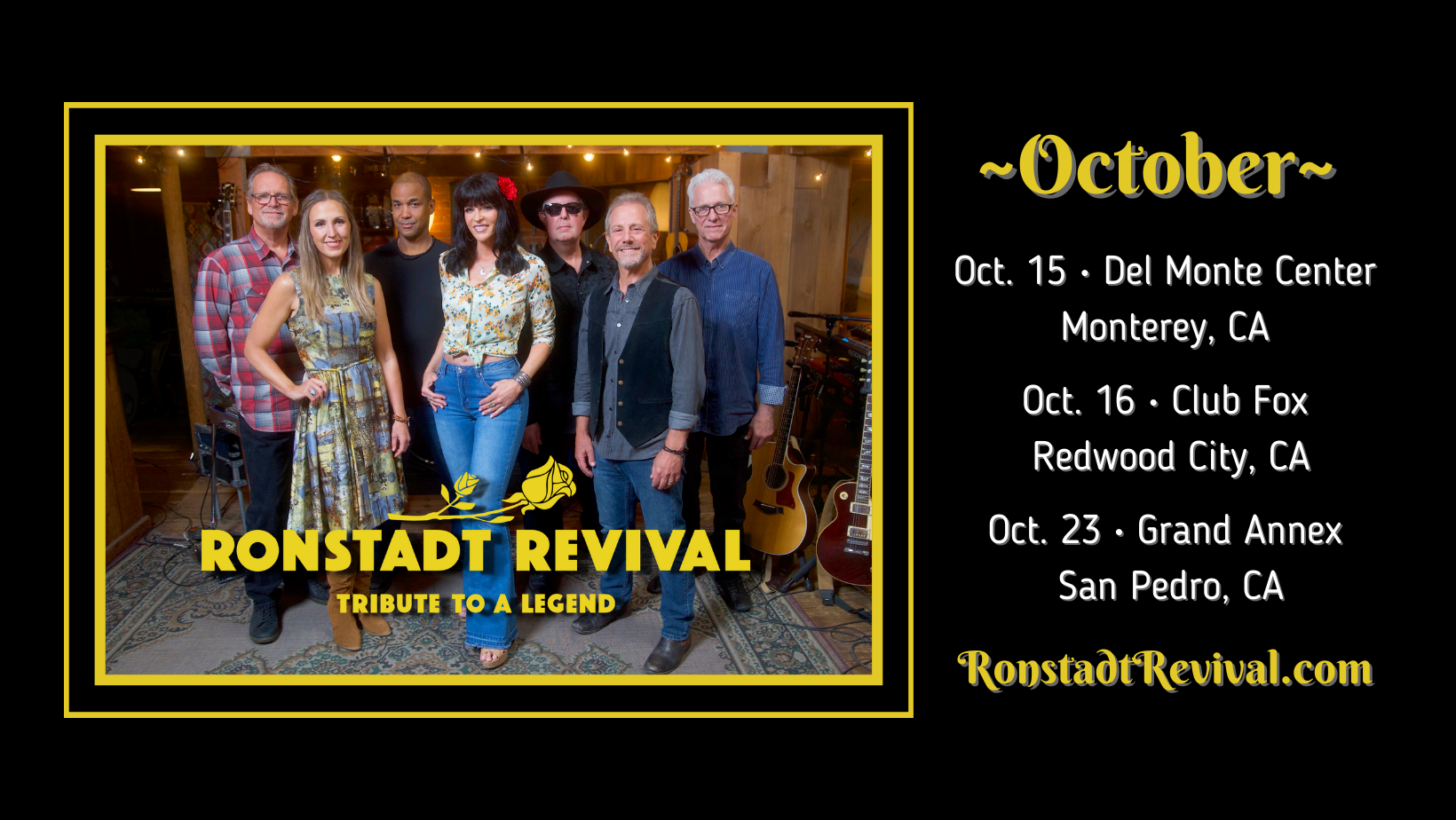 🎶You And I Travel to The Beat of a Different Drum🎶

Ronstadt Revival recorded live in August of 2021. We just love to perform this song from Linda Ronstadt's early days with The Stone Poneys. It was beautifully written by Michael Nesmith and it is definitely a Ronstadt fan favorite. We have lots of shows coming up so please check our EVENTS PAGE for a show near you and come sing along with us!

Here's a little history on this amazing song:

Different Drum is a song written by American singer-songwriter Michael Nesmith in 1964. It was first recorded by the northern bluegrass band The Greenbriar Boys and included on their 1966 album Better Late than Never!. Nesmith offered it to the Monkees, but the producers of the TV show, who had wide control over the group's musical output early on, turned him down (though Nesmith did perform a short comic version of the song in an episode of The Monkees).

The song became popular in 1967 when recorded by the Stone Poneys featuring Linda Ronstadt, who took their version of "Different Drum" to No. 12 on the Cash Box Top 100, No. 13 on the Billboard Hot 100 chart, and No. 16 in Record World magazine. "Different Drum" did best in New Zealand, where it reached No. 5.

Michael Nesmith wrote the song in 1964, when he was looking to start performing as a singer-songwriter. "Different Drum" tells of a pair of lovers, one of whom wants to settle down, while the other wants to retain a sense of freedom and independence. Its narrator is the lover who wants to remain free, telling the other that "we'll both live a lot longer" if they part ways now.

Happy Birthday To Us!

Happy Birthday to us! 🎶🎉🎶 Today we are ✌🏼! We are so excited about the future and just love sharing the music of the legendary Linda Ronstadt! We have lots of shows before the end of the year so check out our EVENTS PAGE and come celebrate with us! 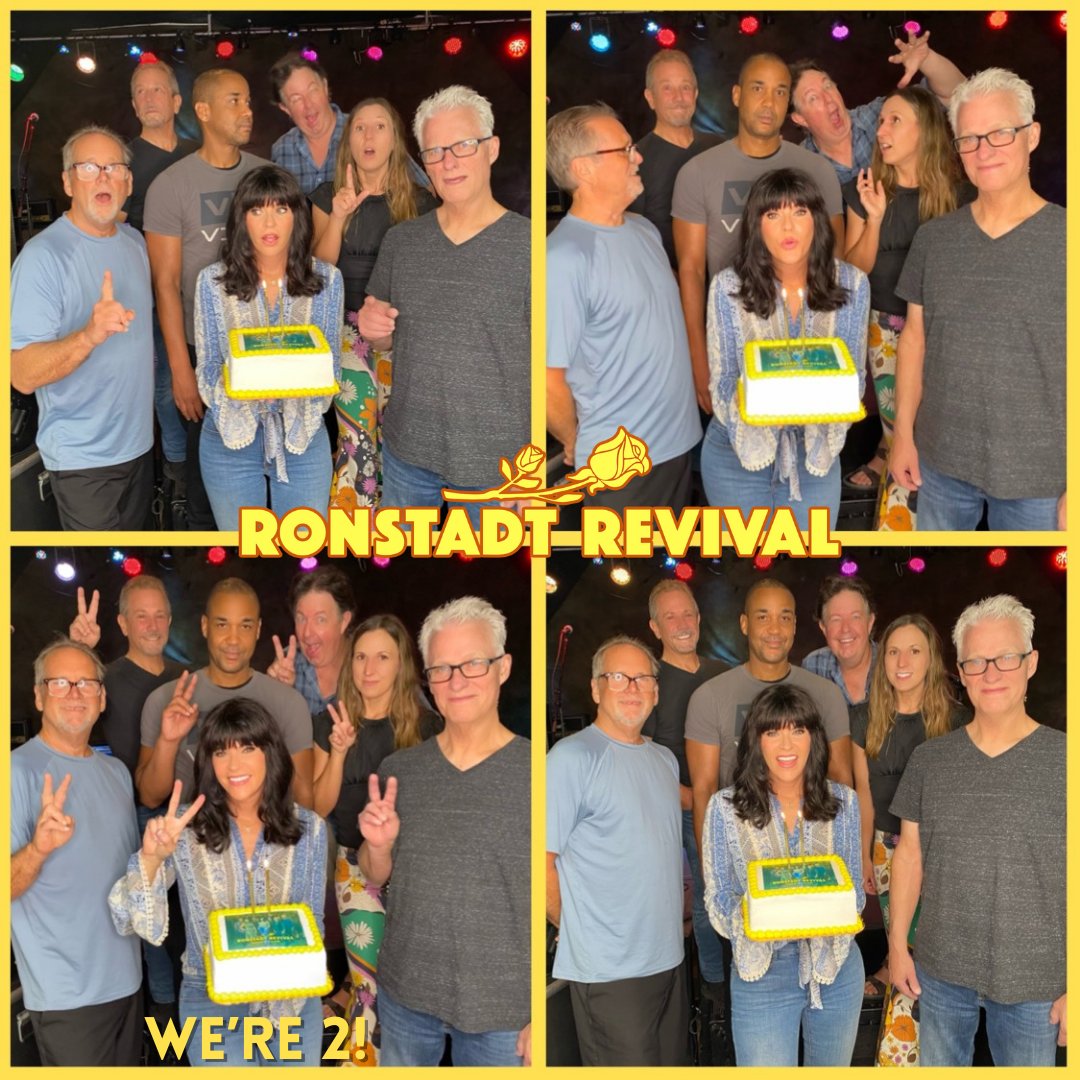 Here’s a little video to help your weekend out! Willin - Written by Lowell George in 1971 and recorded and released by Linda Ronstadt in 1974 on her album Heart Like A Wheel. When Ronstadt Revival - A Tribute to Linda Ronstadt formed, it quickly became a favorite to perform. We hope you enjoy this live recording and hope to see you at an upcoming show. Check our EVENTS PAGE while you’re here, lots coming up!

Ronstadt Revival will be live at Club Fox on Saturday, October 16th! Tell all of your friends and grab your tickets for a fun night of all of your Linda Ronstadt favorites! Check out our EVENTS PAGE for details and tickets! 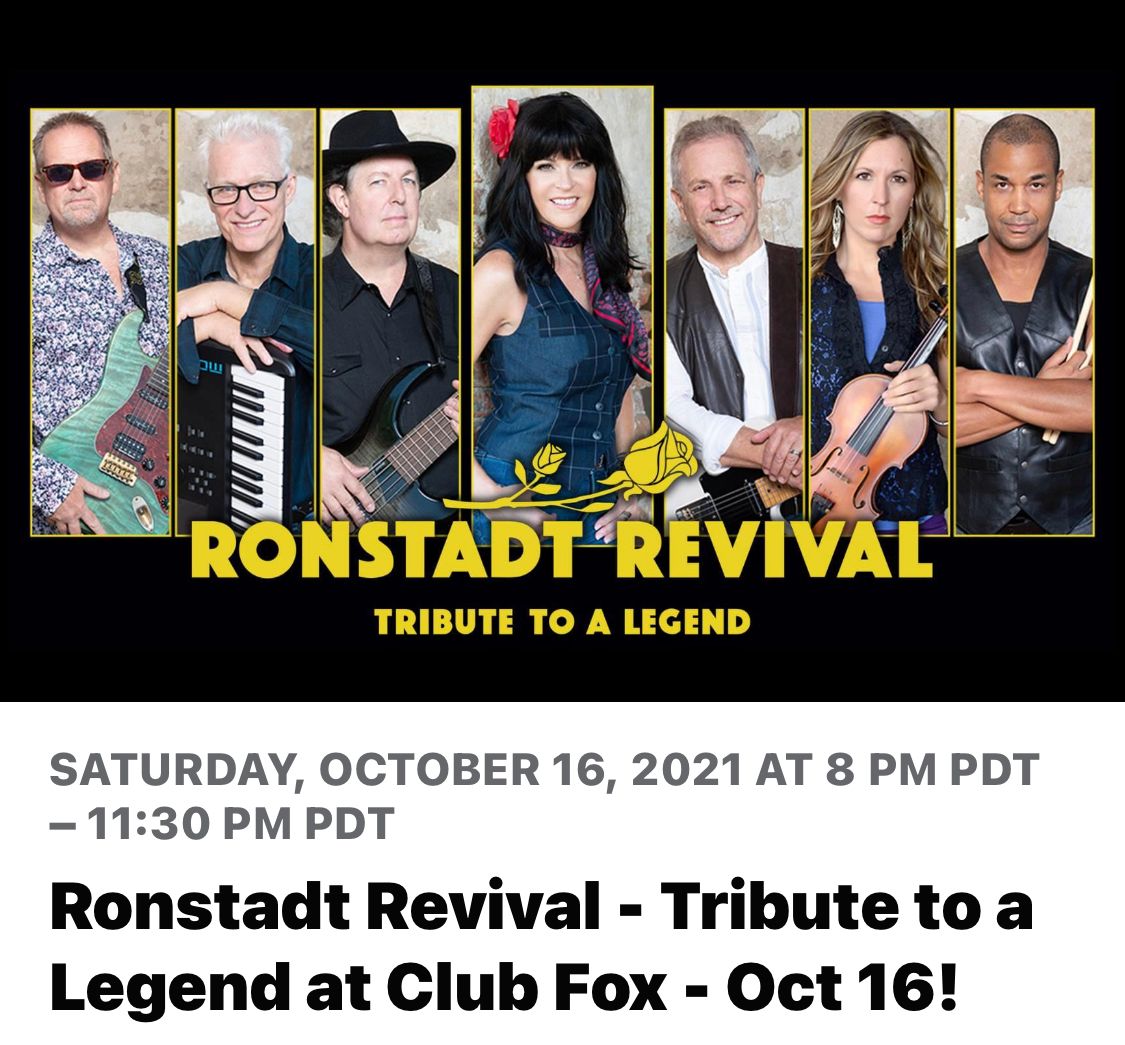 Just added! Grab the whole family and come ring in the holidays with Ronstadt Revival at Historic Hemet Theatre on Saturday, December 18th! We’ll be sharing all of Linda Ronstadt’s hits plus selections from her Christmas album! 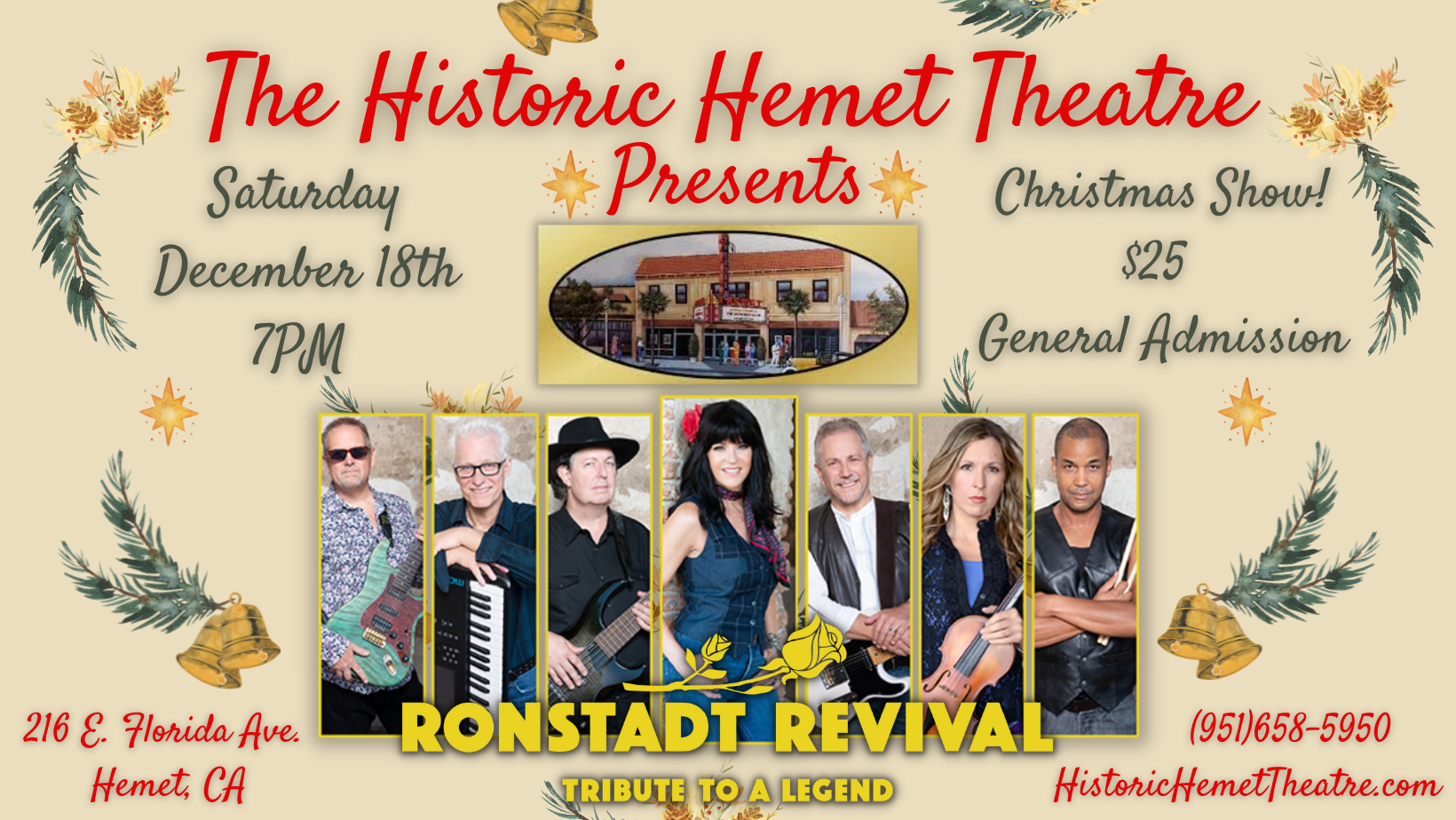 Check out our new sizzle reel and come sing along with us at a show near you! More being added this week! Go to our EVENTS PAGE for all of the details and ticket links!

We are so excited to share our new promo video! This is a 100% live recorded performance! We have lots of shows coming up and will be adding more this week! Be sure to visit our EVENTS PAGE while you're here and grab your tickets today!

We had such a great team that helped us get this together, it really does take a village!

Ronstadt Revival at San Pedro's favorite live music venue, Grand Annex! Get your tickets for a fun night of all of your Linda Ronstadt favorites!

Join us for our return to The Coach House Concert Hall with special guest, Ortega Highway!

Join us for a Ronstadt Revival Christmas show at the Historic Hemet Theatre where we will be playing all of the hits from Linda Ronstadt and some beautiful holiday songs as well! For tickets just simply call the box office at (951)658-5950.

Join us for our debut at Rock and Brew inside San Manuel Casino! We'll be spreading holiday cheer along with all of your Linda Ronstadt favorites! Rock and Brews has a fantastic menu so call for a table reservation today! (909) 425-4838. Ho Ho Ho! We can't wait to ring in the holidays with you! Sets from 7-10pm.